A narrow victory for Monarchs, Monarchs and Austins both scored 8 out of 12, but discounting board 4, Monarchs scored 7 and Austins 6.5.

Thanks to Steve & Bill for organizing another successful Jamboree.

Here are the results: 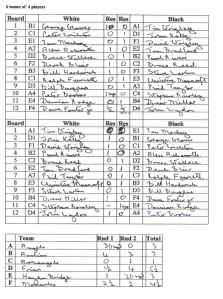 A date for the diary. This information has come through Bill Hardwick from Steve Larkin, who is organising the Jamboree.

This year’s Jamboree will be held at the Haydonian in Haydon Bridge on Tuesday May 19th. As in previous years, the format will be two one hour games (30 minutes per player) with a break for refreshments midway. So round 1 will start promptly at 7.30 p.m. and round 2 at 9 p.m. The charge for refreshments will be somewhere between £2 to £3 per head.

To help make the organisation of the event less of a last-minute scramble, I am asking all teams, whether complete or incomplete, to register with me at stevejlarkin01@hotmail.co.uk by midnight on Monday May 18th at the latest. This should allow me to organize composite teams where necessary in advance of the event and should remove uncertainty surrounding late arrivals. So any team or individual arriving after 7.30 p.m. will find that their clocks have been started in the normal way.

In an attempt to avoid a repeat of the four-way tie for first which we had last year, the following tie-break rules will apply this time:

I realize that the first rule can be tough on the team with a win by default, but in an event with only two rounds, a default assumes a disproportionate significance; and a win over the board should surely count for more. So I fear that everyone competing will just have to accept that, where defaults are concerned, it is down to the luck of the draw!

“Thanks to Steve Larkin for  this report” – Tim

This event was held at Haydon Bridge on Tuesday May 27th 2014. Seven teams took part, including for the first time a team, or more precisely three-quarters of a team, from Penrith. The Friars and Carlisle Castles sides were also short of players and were supplemented by players from Tynedale and Haydon Bridge. So the composition of the various teams was as follows:

The results from round 1 were

The results from round 2 were

So the final team scores were

So the Arthur Fulton memorial trophy was, for the first time in the history of the event, shared by four teams. Perhaps for the future we should devise a way of producing a more clear-cut result?

Bill Hardwick presented the league trophy to the new champions, Friars. And board prizes went to George Glover (board 1), Dave Foster sr (board 2), Bruce Wallace (board 3) and Drew Millar (board 4).

Thanks are due to David Tulip for organising the venue and the ample refreshments. As ever, the atmosphere was highly congenial and the results (almost) incidental.

Put the date in your diary now.

This is a text widget, which allows you to add text or HTML to your sidebar. You can use them to display text, links, images, HTML, or a combination of these. Edit them in the Widget section of the Customizer.